Please brows through the list of our past activities in which volunteers were able to participate.

We performed the first electrofishing of exotic species in the Tivoli pond in Ljubljana in the first week of April in cooperation with the Municipality of Ljubljana, the Institute for Nature Conservation of Slovenia and the Fishing Club Barje.

In October 2015, Municipality of Ljubljana (MOL) passed the Directive on the Tivoli, Rožnik and Šišenska Hill Landscape Park. In collaboration with the Institute of the Republic of Slovenia for Nature Protection (ZRSVN) the hills and forests surrounding Rožnik and Šišenski Hrib, the city's green areas formed by the Tivoli park and the areas of lowland floodplain forests behind Mošenica and Pond Koseze with Koseze swamp forest were successfully protected. 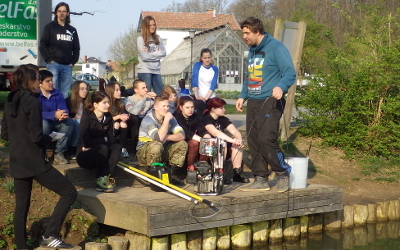 Both institutions hope to preserve the numerous natural values of the area as well as the rich biological and landscape diversity with this Directive. Fishing, stocking and introduction of exotic species in the Tivoli pond have been forbidden by this decree which was also the basis for MOL to outsource the removal of exotic species from the pond, eventually performed by the staff and volunteers of Institute REVIVO.

The method of removal was electrofishing by sectors, so the pond was split in smaller sections with specially modified set nets. In accordance with our expectations the most abundant species in the pond were the pumpkinseed (Lepomis gibbosus) and North American catfish (Ictalurus sp.) which were transferred to the Ljubljana ZOO as animal feed. Not surprisingly, the highest biomass was removed from the pond by the relocation of 15 carps (Ciprinus carpio) that were transferred to their new home by the Fishing Club Barje. Unfortunately, native species are almost absent from the pond which we confirmed by catching only 1 specimen of European chub (Squalius cephalus) and 3 specimens of common roach (Rutilus rutilus) in the entire pond.

Throughout the 5 days of electrofishing we simultaneously conducted awareness raising workshops for visitors, presenting the exotic species in an aquarium that we set up and explaining the electrofishing, the challenge of exotic species control and the necessity to conserve nature and biodiversity. We were surprised by the high interest, support and concern expressed by the visitors, some of whom were also very curious and knowledgeable about their "green capital". 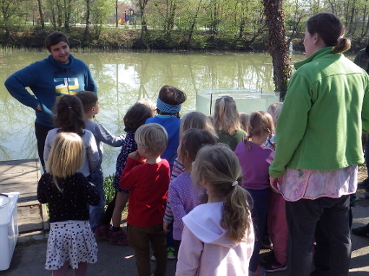 Special attention was given to younger and the youngest visitors of the park, since Tivoli with its pond serves as an important recreational and outdoors activity area for them. More than a few nearby kindergarten and primary school groups visited us during the campaign and the high school students from the Biotechnical Educational Centre Ljubljana (BIC) were given the opportunity to actively engage in our work, setting up the nets, determining the species and measuring the fish.

In our opinion the exotic species removal from the Tivoli pond was extremely successful: - the method of electrofishing in the pond was used in the pond for the first time and was proven effective
- based on the gathered data we can estimate the biomass in the pond before and after the removal of exotic species, and most importantly,
- the problem of exotic and invasive species was presented and explained to the general public over mass media as well as to the local community and visitors through the on-site workshops and informational leaflets.

We express our special thanks to the volunteers who selflessly supported the campaign by the field work they performed, their knowledge and the good will they showed throughout the duration of the activity. They made the week joyful and the work easier for us. The following volunteers were working in Tivoli with us: Denis Glavina, Elena Štendler, Eva Horvat, Grega Benko, Luka Mrzelj, Nika Pengal, Špela Lemež, Uroš Videmšek, Žiga Ogorelec in Živa Hanc.

You can check out some action photos in the Gallery.

A press conference was organized on the first day of the removal by ZRSVN and several media contents/contributions were published which you can check out at the links below.

You can reach us over regular or e-mail, phone or fill in the form below and we will respond as soon as possible.